All I can say is it is about damned time the ACLU has finally gotten off their asses to fight these laws. If only they had done this sooner. 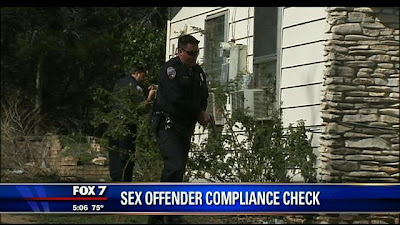 GADSDEN, Alabama -- The American Civil Liberties Union has filed a lawsuit against Etowah County Sheriff Todd Entrekin and two officers in the department over what they say are "unannounced, random, and suspicionless" searches of the home of a registered sex offender.

The lawsuit, filed in U.S. District Court for the Northern District of Alabama, does not name the three family members. They are identified in the suit as John, Jane and James Doe. The law firm of Jaffe & Drennan filed the suit today, according to a news release.

"These officers are trampling on this family's constitutional rights, and because this is the sheriff's policy, we fear this may be happening over and over again to families around the county," Buskey said in a release.

According to the ACLU, one member of the family is a registered sex offender because of an offense committed as a child. The suit contends he has "fulfilled every requirement" under the offender registration and community notification act. He must register four times a year with the sheriff.

However, the ACLU contends the family is threatened with arrest if they fail to cooperate with random inspections of their home. The suit contends this is a violation of the family's Constitutional rights, because it takes place without a warrant or any reasonable suspicion of wrongdoing.

The suit seeks an end to the searches and the policy of inspecting registered offenders' homes. It also seeks unspecified monetary damages.

Sheriff's Department spokeswoman Natalie Barton said the department was aware of the lawsuit, but had not seen the complaint and had no comment.
Posted by oncefallendotcom No comments:

Vigilante violence encouraged by the registry is very common these days. I bet this guy gets a slap on the wrist.

BIRMINGHAM, AL (WBRC) -
A disabled Army veteran from Anniston has been charged in a murder-for-hire plot against his neighbor, FBI officials said Monday.

Allen Wayne Densen Morgan, 29, is accused of hiring an undercover FBI agent to murder a man he believed raped his wife days earlier, according to court documents filed by the FBI.

The affidavit says an FBI agent called Morgan pretending to be a member of the Ku Klux Klan on Thursday, Aug. 22. The agent called to verify that Morgan wanted to hire someone to kill his neighbor.

Morgan told the agent that he had just confronted his neighbor in Munford and fired several rounds at the ground to intimidate him. He said he didn't intend to kill the neighbor then because "several people were present."

According to court documents, Morgan described how he wanted his neighbor murdered by stating, "I want this man hung like a tree like an animal. I want his [expletive] cut off and I want him cut...I want him hung from a tree and gutted...that's how I want him to die. Die a slow painful death and that's it."

Morgan said he would discuss payment with the supposed hit man when they met up on Sunday, Aug. 25.

On Sunday, two undercover agents met Morgan at the Econo Lodge in Oxford around 3:30 p.m.

Morgan offered them payment in the form of a watch and a necklace and also promised to pay them with a firearm at his home. He gave the undercover agents a map to his neighbor's home and described his neighbor's physical appearance.

At the end of their meeting, the FBI agents took Morgan into custody, questioned him, and charged him murder for hire.

Morgan made a brief appearance along with U.S. Marshals at the Jefferson County Sheriff's Office on Monday, but he is no longer in custody there, according to a spokesperson for the sheriff's office.

It's unclear where Morgan is currently being held, but the FBI confirms he is in U.S. Marshals' custody.

Morgan had an initial appearance on Monday morning. There is no word yet on his bond.

FOX6 News has not been able to obtain a mug shot of Morgan because he is in federal custody and the Department of Justice doesn't release such photos.

We have also learned that Morgan's neighbor, the man he wanted to be killed, does have a prior record. In 2008, he was accused of raping a 13-year-old and he pleaded guilty to a lesser charge.

Morgan told undercover agents during one of those conversations that they could pull a picture of his neighbor from the sex offender registry website.
Posted by oncefallendotcom No comments: